We drove through rolling mountains and small villages, passing seemingly thousands of argan trees and stray goats before finally arriving in manic Marrakech. The first thing that hit us was the traffic. It seemed like everyone had their own rules, weaving erratically between each other and completely ignoring the marked lanes. It wasn’t as bad as what we’d seen in parts of South East Asia but definitely more hectic than the laid back streets of Essaouira and Taghazout. Once we finally found a park, we left Gee and Alex to meet our couchsurfing host for the next three nights – Israel.

Israel was originally from the USA but came to teach English at a language school in Marrakech. He’s been living in the medina for two years and had a great knowledge of the area, language and culture. In other words, he was the perfect host for us as visiting backpackers. After getting to know each other for a while we made our way back to his apartment to drop off our bags, then turned right back around to find some good, cheap Moroccan grub.

Israel took us to a small, hole-in-the-wall medina eatery which served up slow cooked tangier chicken with a side of loubia (beans) and bread. This amazingly delicious chicken is cooked with preserved lemon and whole garlic gloves, and cost us a measley 2AUD. After dinner we grabbed a little something sweet, then continued on to meet some of Israel’s friends at their apartment in the new town.

We spent the night getting to know his lovely friends – two of which actually grew up in Sydney – and picking their brains on the best places to visit while in Marrakech, but also other countries around the world. The night had quickly gone by, so we arranged to all meet for breakfast the next morning and made our way back to the medina to enjoy some much needed sleep.

The next morning after we had breakfast at another of Israel’s local hot spots, Anita and I decided to get lost in the medina, but not before saying goodbye to our hitch hiking friends Gee and Alex before they headed back to Agadir. We first had to cross the buzzing main square full of wandering hustlers selling everything from sunglasses to cigarettes. We also saw the famous snake charmers, “hypnotizing” so obviously drugged-up cobras with their flutes. We wandered deeper and deeper into the medina, speaking with surprisingly respectful vendors and inspecting their tables and shelves of miscellaneous goods.

After a tiring day of crawling through the medina, we again met up with Israel and went off to a type of grilled meat sandwhich shop for dinner. The turkey sandwhich was Israel’s pick, but all the locals seemed to favour the mixed. I asked the man standing next to me what was in the mixed, to which he answered “everything you see here”, gesturing at a glass cabinet full of hearts, livers and brains. I’ve always been quite adventurous when it comes to food so decided to try both, with Israel and Anita even trying a few chomps of the mixed too.

We spent the next morning getting ourselves organised with bus tickets, cash withdrawals and any bits and pieces we wanted from the medina, then headed to Israel’s language school to present to his students on our travels so far. He mentioned the night before that it would be nice for his students to meet some foreigners, practice their English, but also learn of the interesting places we’ve been so far. We loved the idea, so prepared a short presentation and delivered it to the class.

Afterwards Israel thanked us for coming and presenting, but I explained to him that it was us who should actually be thanking him. You see when you’ve been travelling for an extended period of time you often become too focused on what’s next and forget about what’s been. This presentation gave us a chance to really reflect on the amazing places we’ve seen, the incredible things we’ve done, and the wonderful people we’ve met. It’s something so simple to do but so easily neglected. So thank you, Israel.

By this stage we’d worked up a bit of an appetite so I opted for a typically-Marrakechian cow spleen sandwhich (you read it right) and Anita something a little more tame, then we ventured on to our favourite fruit smoothie place. This particular shop sold mixed fruit smoothies, but smoothies so good it had crowds holding up cash to be served at almost every time of the day. And at less than 1AUD a glass, it’s easy to understand why. The smoothie is a mix of avocado, banana, strawberry and date smoothies, poured on top of eachother in layers. It was easily one the best smoothies I’ve ever had.

After some afternoon relax time at Israel’s we grabbed one last chicken tangier and beans for dinner then packed our bags for our 10-hour bus ride to Mhamid the next morning, where we planned to spend four days helping to build a camp in the Sahara Desert. 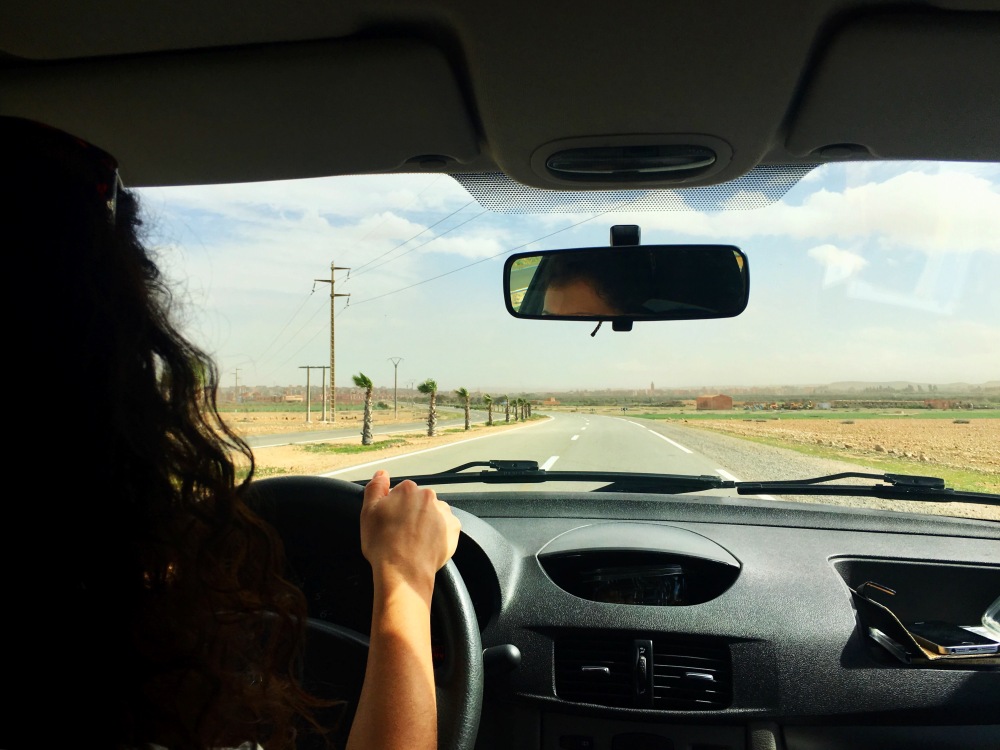 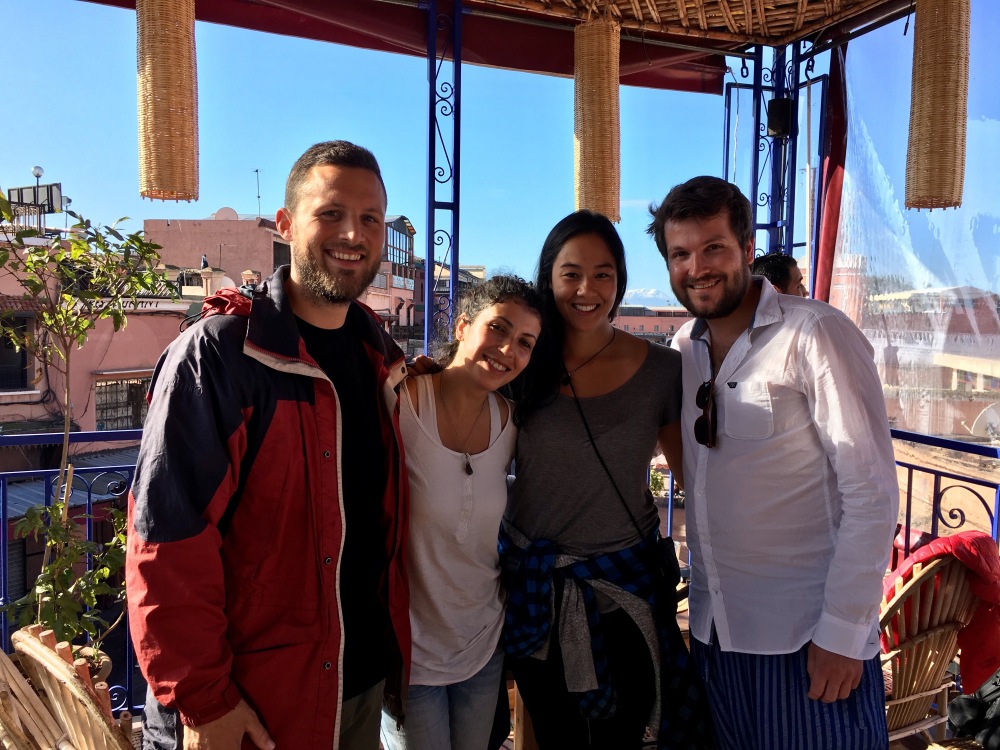 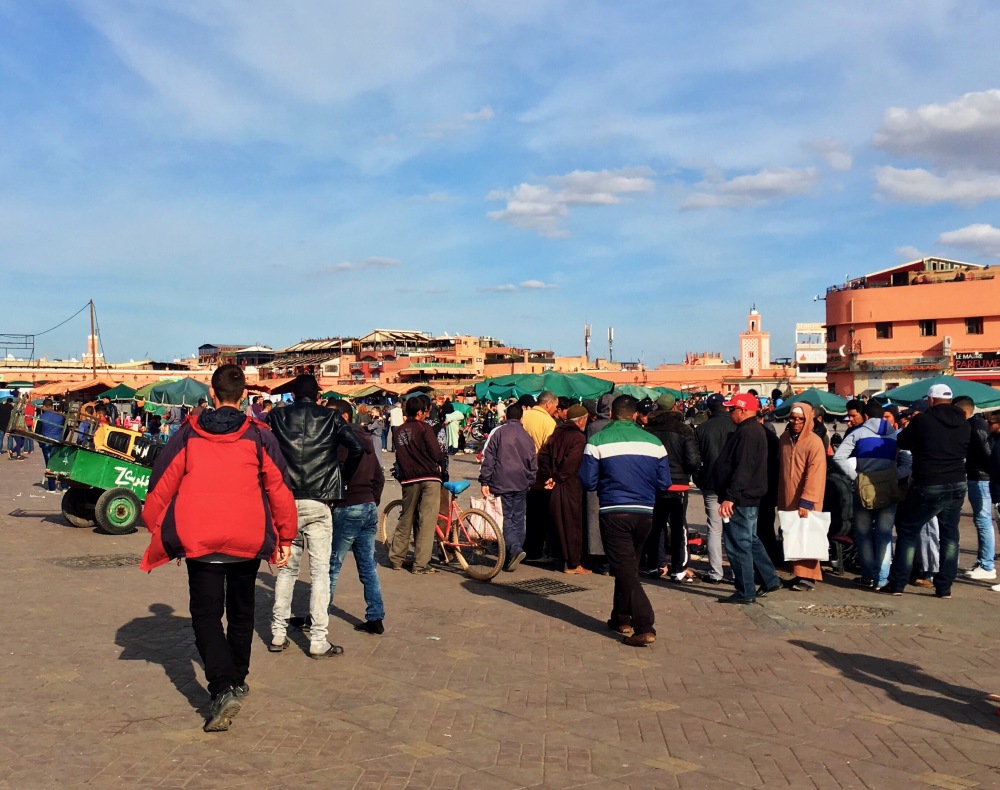 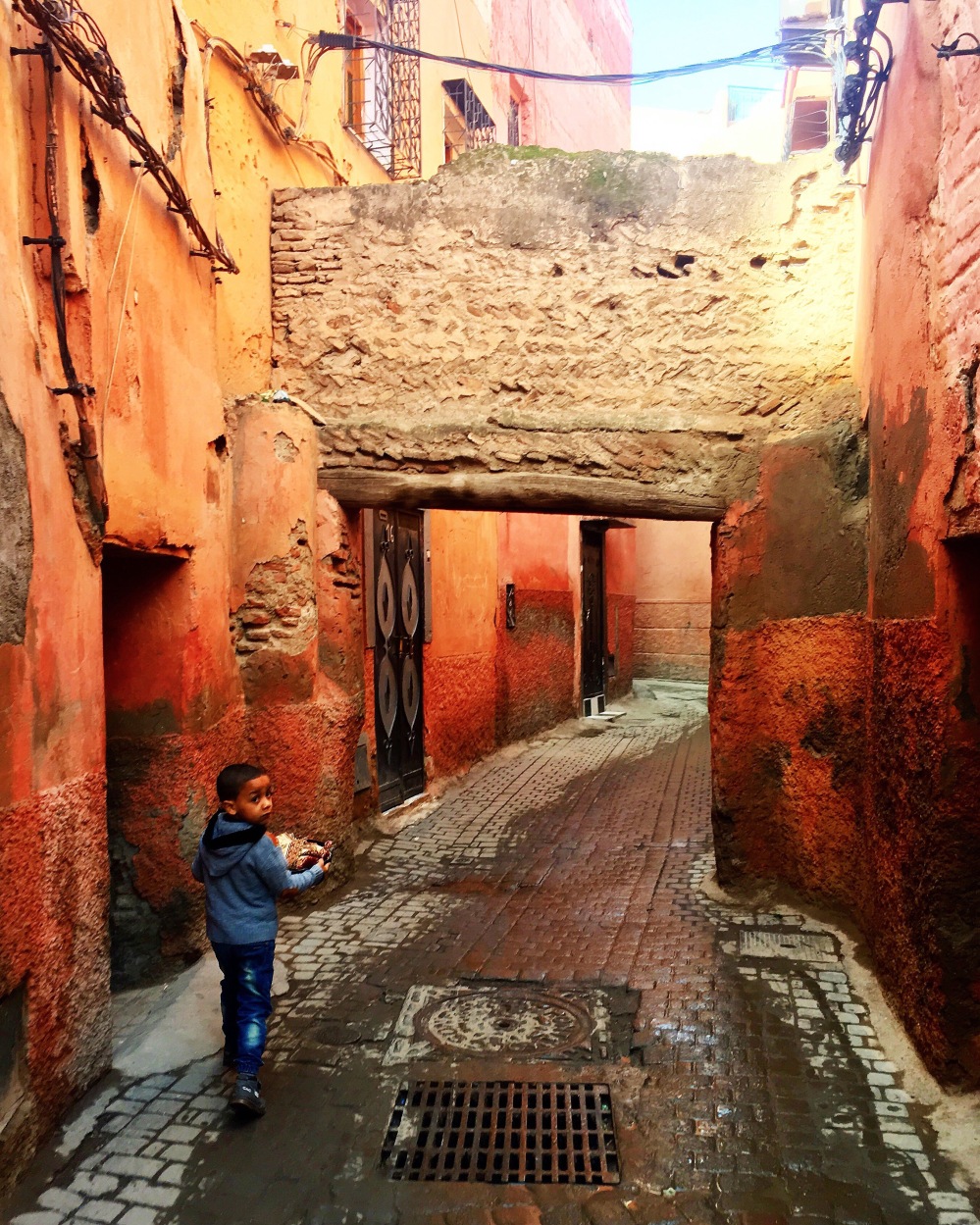 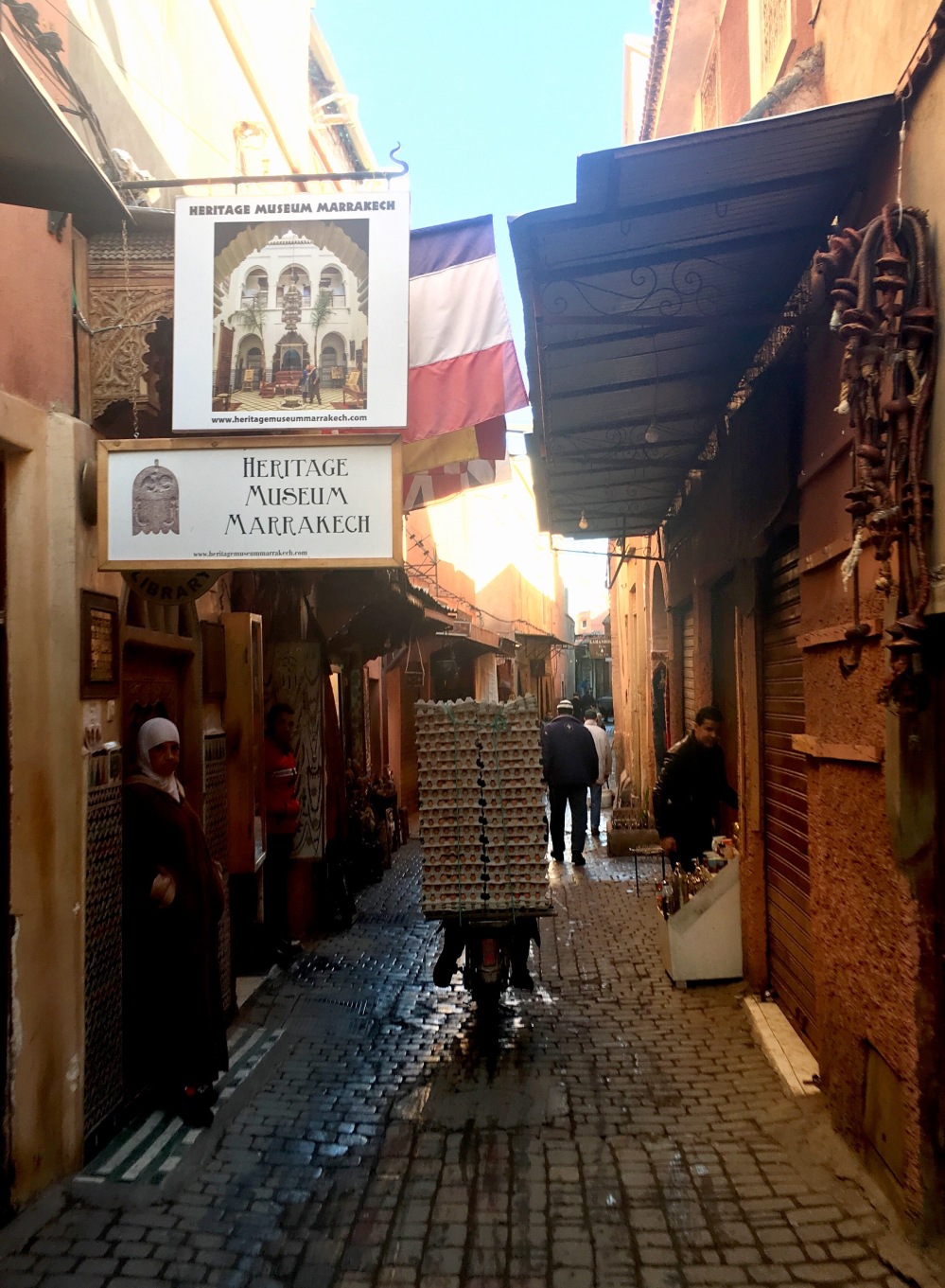 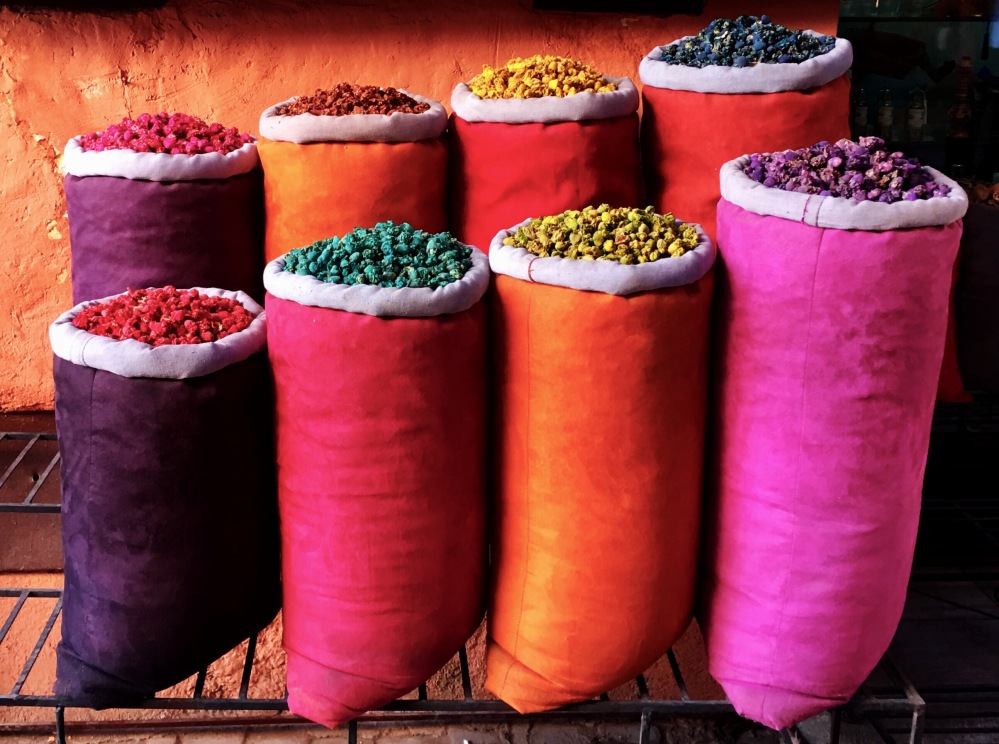